Craig trudges through the quiet streets, collar turned up against the hissing wind with Rusty at his heels. His face is numb and his ears prickle with cold, but his brain is buzzing and at least his belly’s warm. Those grilled cheeses were good.

He turns the corner into Stainsby Road, and…jackpot.

The building towers above him. It’s a four-storey tenement, sturdy red-brick but faded and shabby. He loiters across the street, hanging back under the shade of a shop awning. A bent-over old man with a rickety grocery cart lumbers up to the front door. It takes him almost twenty seconds to fumble with his keys, twice that long to wrestle the cart up the stoop and through the doorway. The flat’s small windows are filmed with dirt. Cracks aplenty. The place is a dump. But out of the way. A tumbledown brownstone. People’s eyes slide right past.

Assess: a dump is good camouflage.

He circles the crummy building. Not a social hub, that’s for sure. Only two windows are lit up, one on the second floor and a flickering orange glow on the third. A notice pinned on the wrought-iron railing out front: 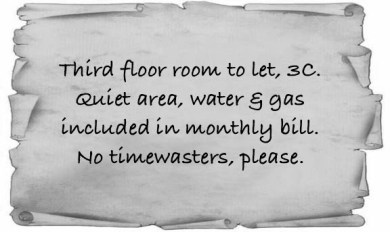 The front door is ancient, with a cracked glass pane far too large for adequate safety or tenant security. The lock takes a full minute to pick just by virtue of it being rusty and the tumblers bent. Needs graphite. And a nail file or two. No wonder the old man had trouble.

Inside, the building smells of mildew and dust. The floorboards groan under his feet, the stairs are creaky, and the paint on the walls is chipped and scuffed. It was probably once dark green. But the worn bones of the building are good: plaster and lath walls, skilfully carved wooden rails along the banisters. The building is shabby and old, but solid. There is a good past in it, even if it has been ill-used for a long time.

He and Rusty creep up the stairs together, scanning all the shadows, ears pricked for danger. Halfway up a loose floorboard creaks under his boot. He freezes. Rusty nudges his hand, nibbling at his fingers. Keep quiet, you moron.

The first floor is all dark hallway. Mouse droppings smeared along the baseboard. A dark patch of mould on the wall. Terrific. Fourteen paces to the next flight of stairs. More creaky steps. Then onto the second floor. Three more closed doors. Faint shuffling behind the middle one. Bump. A muffled curse. Probably the old guy. Elevation required. He climbs straight to the third floor, where both lamps are out in the hallway. The cast iron radiator on the wall is ice-cold to the touch. A tattered carpet. The faint echo of dripping water in the background and a tinny screechy melody through the walls – probably a very badly-tuned fiddle next door.

He leaves the backpack at the top of the stairs and stalks up and down the hallway. The southwest corner is best – furthest from that godawful fiddle noise.

The lock on flat 3A is broken, and the door only takes a firm lift to open. There’s furniture inside – he goes completely still when he sees a tiny old woman asleep in a battered armchair in the front room, her mouth open as she snores. The marmalade cat sitting on her knee stares at him, but doesn’t move. It blinks and yawns wide, showing needle-sharp teeth.

Best leave it be.

There’s another cast-iron radiator on the wall opposite the doorway. Freezing as well.

He steps noiselessly backwards out into the hallway. He shuts the door carefully, but the door jamb is crooked on top of the loose lock. Clearly an inattentive landlord: good for covert surveillance. Bad for helpless old ladies and their cats.

He examines the other doorways. Flat 3C is indeed empty. The hinges squeak when he opens the door. There’s some furniture here too, albeit dusty and worn. Skirting board crusted with dust. A ripped mattress near the window, crowned with a stained pillow that’s clearly in its twilight years.

Meh. Way better than sleeping on rocks like a caveman.

He blinks away the memories. This’ll do fine. One of the upsides of being ex-military: almost any place is serviceable. There’s always somewhere worse to compare it with. Craig tests the (pathetic) door lock. Loose. Civilians have obviously expended far more effort perfecting grilled sandwiches and tea-brewing than on basic home security.

Both windows in the narrow bedroom and the musty living room overlook the street. Wide angles. Clear fields of vision outside. Ideal. Ambient midday heat. No fireplace and only two guttering oil lamps, but the ancient stove has gas and the sink has water. There’s a bathtub in the corner, small and cramped. It’ll suffice. Rusty shuffles around on the crunchy mattress and settles down with a huff while he examines the bathroom. Scummy brown water splutters and gurgles out the tap until it eventually runs clear. The sink shudders and rattles loudly.

Has he woken the old lady up.

He shuts off the tap, listens hard, but no shuffling of feet from down the hallway.

He moves out into the corridor, assessing. Eleven paces, from end to end. Not ideal.

But flat 3C is the corner unit at the top of a steep stairwell. Restricted access. Any incoming attack squad funnelled single-file up winding staircase to narrow landing.

Assess: enemies only able to come at him one at a time. Result: able to easily tear through them if ambushed at a bad moment. Attack from the high ground. Sergeant Harper: one, potential home-breakers: nil.

And they’ll have to deal with him first before they reach the old lady.

Even if it is a bit terrifying.

He stows his rucksack into the corner of the bedroom, wedges a battered chair under the door handle, gently shoos Rusty off the bed and turns the crunchy mattress over.

The other side is slightly less crunchy.

He tucks the knife under the mattress close to hand before easing down onto his side, facing the door. Rusty’s cold wet nose snuffles into his ear before he curls up against Craig’s chest.

There were two grocery shops within three hundred yards of the flat. A baker’s just two streets away. Ideal. He fishes in his pocket for loose change. Five dull brown pennies. Just three lonely shillings.

Not like he has any uncut diamonds in that bulky rucksack. His current expenses only consist of tea and grilled cheese, but still: his dwindling army backpay won’t last forever. Anxiety curls its claws through him: rent, groceries, medical supplies during illness, heating oil in cold weather.

Tom is a Devonshire lad who loves to write, fuelled by the magic of dark chocolate and Yorkshire Tea. Writing is an amazing way of expressing his inner self through powerful stories and vivid characters. His work has featured in Spillwords Press, Literally Stories, Dreaming in Fiction and Whatever Keeps the Lights On. Thanks for dropping by! 😀 View all posts by Tom

Find me on Amazon Kindle! 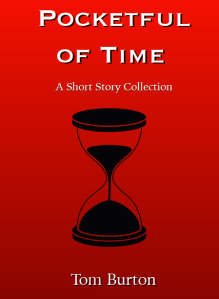